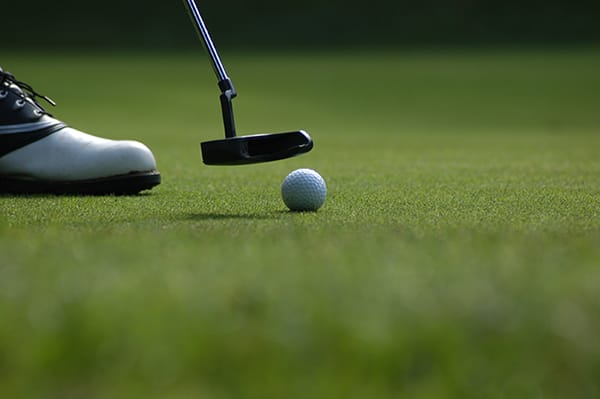 You are practicing your swing and then all of a sudden, to your surprise, you hit your ball accidentally. What happens now? What’s the updated rules of golf have to say about such an unnecessary situation?

To help us understand how the written rules of golf would handle this situation, let’s examine the scenario when it happens in different areas of the golf course.

To get ready, it is normal for us players to practice/simulate swinging before taking the final blow. In this scenario, the ball, which is on the tee, is not in play. It only becomes a ball in play once a stroke is made.

When the practice swing accidentally hits the ball, you are considered to have not made a stroke. Thus, the golf rules simply allow you to re-tee the moved ball (or replace it with another one) without penalty. This is covered under Rule 6.2b(5) and 6.2b(6).

It is a usual sight to see ourselves measuring up things in the putting green and performing a couple of swing simulation before actually taking our shots. But what happens when during the process the ball was accidentally hit?

Well, similar ruling applies. You are simply to put the ball that was moved accidentally back to where it was before the unintentional hit without penalty. This is covered under Rule 13.1d(1).

We identify these areas as the bunker, the penalty area or anywhere in the general area of the golf course. So what happens when you practice a swing in these areas and then move your ball accidentally?

Remember that in these areas your ball is already in play. Causing your ball to move in this instance is not a made stroke and you have to put the ball back in its original position. However, you will be given a one-stroke penalty and that’s basically for moving your ball in play. This is covered under Rule 9.4.

Some other unusual scenarios

Tee area: Out of bounds and ricochets

You may have made your tee shot but the ball went out of bounds and/or hit a tree and ricochets back within the tee area. Then you play the ball again from the teeing area, but in the process accidentally moved the ball by a practice swing. Fortunately, this will cause you no penalty.

Other areas: Played on misplaced ball

It’s highly unlikely that we forget what should be done after accidentally moving our ball during practice swing. But if you do forget and play the ball away from its original position, it would cause you a two-stroke penalty. This is covered under Rule 14.7.

Golf Record: Prolific PGA Tour Players with Most Wins in their 30s

How to Win a Golf Game Against a Better Golfer

When Your Golf Ball is Moved, Deflected or Stopped by Outside Influences